In Nantes Saint-Nazaire, the cultural and creative industries are part of the local identity, generating strong potential for growth and job creation. Between 1993 and 2014, they grew by 63%, exceeding all other economic sectors taken together. This thriving scene is growing in an organized fashion, thanks to the Creative Factory on the Ile de Nantes.

The Creative Factory Cluster and the Atlanpole technology park offer a project accelerator system with high economic potential. Every year based on a call for proposals, project leaders are selected and offered group workshops, tailored advice and coaching services.

Many facilities are available to entrepreneurs and creatives to work and grow their businesses. They can move into Le Karting on the Ile de Nantes, La Cantine Numérique for coworking, La Centrale in Nantes, or Le Garage in Saint-Nazaire, to flesh out their creative ideas.

A wealth of study programmes

By 2020, the Ile de Nantes will have its "creative arts campus", with 4,000 students, a quarter at Masters level, and a hundred or so professors: National School of Architecture, ESMA Cinécréatis, Graphic Arts Centre, Audencia Sciencescom, School of Fine Arts, Digital Culture Centre of the University of Nantes, School of Design and École Pivaut.

Alongside Amsterdam, Berlin, Milan and Barcelona, Nantes is the only French city that is part of the ECIA network (European Creative Industries Alliance), which assesses the economic impact of creative industries.

No wonder: Nantes Saint-Nazaire is famous for its creative image, and more and more key figures of the creative industries are coming here, forming a strong sector of the local economy. More than 9,000 businesses, nearly 35,000 private jobs !

A showcase of cultural creativity

On the western tip of the Ile de Nantes, the former shipyards have been redeveloped to focus on culture and creation. The unique arts project of the Machines de l'Île is a showcase of Nantes inventiveness, featuring a giant walking elephant made of metal and wood. And this is where the Creative Factory was formed, anchoring a large project that will include 15 hectares of creative businesses, grandes écoles and laboratories.

The Nantes music scene, which gave rise to famous artists like C2C and Christine and the Queens, revolves around La Fabrique, a space devoted to contemporary music with rehearsal studios and spaces for artistic creation and diffusion. In the near future, representatives of all the other arts will join them.

The Creative Factory is a project combining urban redevelopment and economic development to generate the vitality conducive to networking and growth.

At the heart of the District, the 4,000 m² of the former Alstom Halls are being redeveloped. The space will be dedicated to start-ups (in an incubator or a business park) and established businesses working in the creative arts.

Ultimately, the Halls will be home to businesses, the Cantine Numérique de Nantes, training centres, the Regional Innovation Platform dedicated to design, and even the restaurant of the Voyage à Nantes.

The flagship of the District is a cluster whose mission is to support creatives by helping them set up their business, network locally and obtain funding.

Nantes boasts some twenty video game studios. Beemov is the leading visual novel game studio in Nantes, while Succubus Interactive invents serious games for businesses, and there are countless indie studios that focus on diversification. At the crossroads of video games and graphic design, motion graphic design is another Nantes speciality that is growing rapidly. The Atlangames cluster, the driving force behind this creative ecosystem, provides them with a friendly and highly appreciated coworking space in the very centre of the Quartier de la Création (Creative Arts District).

And finally, many specialized schools are located in the Creative Arts District. It is already home to the National School of Architecture, ESMA Cinécréatis (school of cinema and audio-visual arts) and the Graphic Arts Centre that groups La Joliverie graphic arts school and Grafipolis printing trades school.

In autumn 2017, Audencia Sciencescom moved into a new building, the Médiacampus. And soon the School of Fine Arts and Digital Culture Centre of the University of Nantes joined them. 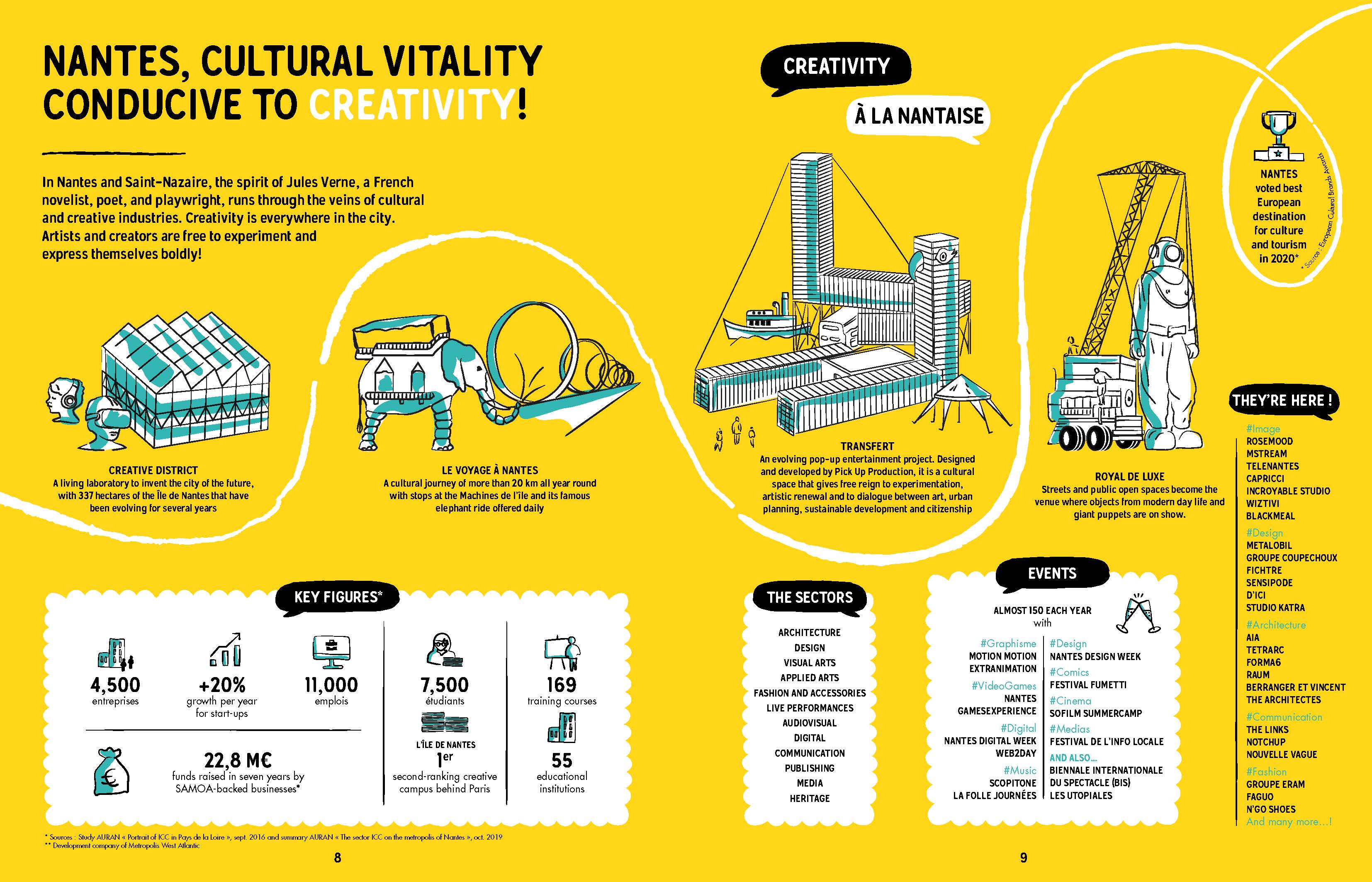 are set aside for businesses in the Creative Factory in Nantes